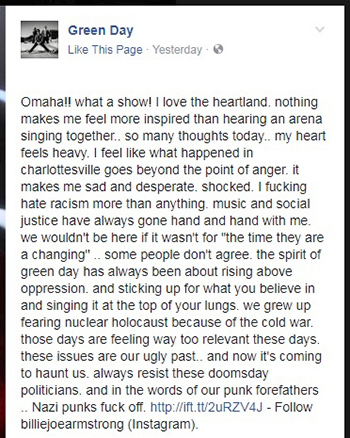 In the wake of the white supremacist rally over the weekend in Charlottesville, VA and its violence, many politically minded musicians and labels expressed themselves on social media about it.

Billie Joe Armstrong took to Green Day’s Facebook to share his thoughts, which included “I fucking hate racism more than anything.”

Several shared “Nazi punks fuck off” or included it in their comments including Rise Against, Defeater, and Asian Man Records.

Scott Ian of Anthrax posted to his Facebook page, “You either condemn it or you are it.” 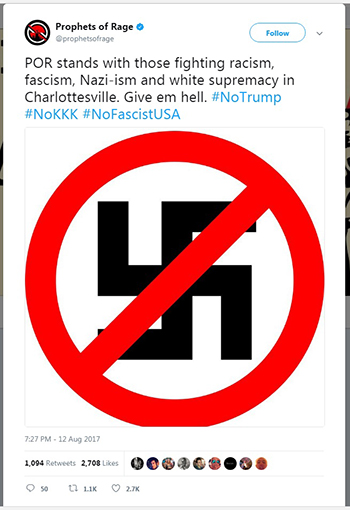 Prophets of Rage said on Twitter that the band stands with “those fighting racism, fascism, Nazi-ism and white supremacy in Charlottesville.”

Sacred Reich tweeted: “There is no place for white nationalists, white supremecists, Nazi’s, KKK or whatever name you call yourselves,” and also debated commenters on the Facebook version of their statement.

Record labels have chimed in too. Tankcrimes, as they explained later, reused Nirvana liner notes, saying in part, “If any of you in any way hate homosexuals, people of different color, or women … leave us the fuck alone!”

And Killer Mike posted more than once on his Instagram—all of his posts on the matter are worth reading. 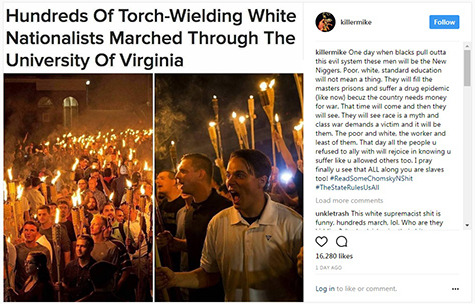 One Reply to “Musicians respond to Charlottesville, VA march”