Greensboro, NC band Irata plays heavy rock with a lot of melody. On the band’s new album, Tower, there’s both guitar and vocal harmonies, plenty of clean singing and clean guitar riffs, and even a brass instrument in there. The heavy element is in the form of the downtuned and a bit fuzzy string instruments (guitar and bass). It sounds like the basic tracks were recorded live in the studio, which if not true is still a nice production touch. D.U. will go so far to say the record is ambitiously melodic. 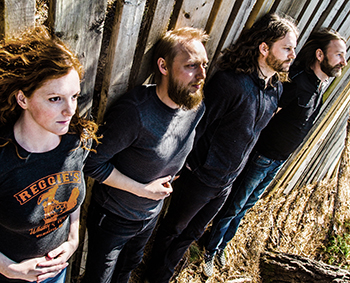 The influences range from Jane’s Addiction to Mastodon to maybe even some Genesis and Melvins. In addition, bassist Ward Case explained in a press release the inspiration behind the title track: he was on a fishing trip off the coast of North Carolina, heading to The Tower, “an old weather station that stands at the end of Frying Pan Shoals about thirty miles out, right before the ocean floor drops off. It was a sunny day but the ocean was very rough and it was cold.”

Tower isn’t the type of thing that D.U. usually listens to (y’know, it’s not death metal or grindcore), but it’s a good record. It comes out on Small Stone Records on May 24, on digital, CD, and vinyl formats. Pre-orders are up now, but a couple songs are already available for streaming: “Weightless” at Heavy Blog Is Heavy, and “Tower” at The Obelisk.

Irata is hitting the road with Weedeater, so check out the dates.