We received a package of CDs from the label Every Day Hate from Poland, which is nice because we like getting CDs from labels—in the digital promo age this is a dying custom. The package contained:

D.E.R. Quando a Esperança Desaba
These folks are from Brazil and play grindcore. Their lyric sheet is in both Portuguese and English, which is handy for folks in the Northwest hemisphere. Their grind has a bit of death metal in it and is fast, fast, fast. None of the 16 songs cracks the 2-minute mark, and the various songs aren’t very different from eachother from a high view. “Lucreo e Troca” is one of the few songs where they’re not at blistering tempos 100% of the time. Lyrically they tackle social subjects such as capitalism, and spend a fair amount of time singing about hate.

They included a video for one of their songs on the CD (without giving any indication in the packaging that it’s there), which is certainly a throwback (old school?) way of doing things.
Released on Every Day Hate and Goressimo

Noisebazooka Humped World
The standard for grindcore is set high, but at the same time is set very low when it’s in the “noise” or “goregrind” category. Noisebazooka is in the noise column, but is also aware of the lyrical assumptions of that scene. They added the note “We do not support any kind of racism and xenophobia!” to their booklet to presumably address that, although sexism is noticeably absent from their proclamation.

Noisebazooka is also taking advantage of the low bar side of expectations. It’s unclear whether it’s because of the first Napalm Death record, the first Carcass record, all of Anal Cunt’s records, a combination of same, or something else, but as a result a band can get away with not putting any tangible effort into dynamics or composition, and Humped World is a good example of this. It’s almost like it doesn’t really matter what these guys (or any other band of their type) is playing as long as it’s very fast, very distorted, and the songs are very short. That just doesn’t make for interesting music. 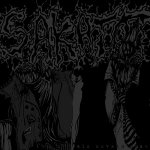 Sakatat Bir Devrin Sonu
The slogan emblazoned on Sakatat’s CD sleeve reads, “They might need us but we do NOT need them!” They go on to dedicate their eight-track EP to punk and metalhead activists, and on their website they give a shoutout to the DIY community.

Bir Devrin Sonu doesn’t stop to give the listener a breath, and instead piles on the d-beat and blast beat mercilessly, not slowing down for more than a few bars at a time. This Turkish three-piece plays music that isn’t groundbreaking by any means, but they’re good at playing grindcore. That pretty much sums it up: Sakatat plays grindcore well.