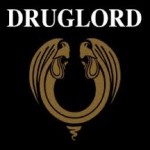 Back for another swing after their demo a year previous, Richmond’s Druglord coughs up four songs instead of last demo’s three, and the packaging is slick, which is a major improvement. And the songs are doomy. Real doomy.

Good interplay between the guitar and bass on the first track, “Motherfucker Rising” (great name for a song, too). We’re three minutes in before the vocals make an appearance. The middle part of the last song, “Eternal Grave,” sounds uncharacteristic for them—almost… playful? But that doesn’t last long, as they transition into the only rocking tempos of the demo.

Druglord is again showing their talent at playing this kind of music, without a lot of flash. The songs keep the dry, heavy sound going. Going for a total of about 25 minutes. Apparently Druglord doesn’t subscribe to the idea of always leaving your audience wanting more. This CD delivers plenty.
Druglord page