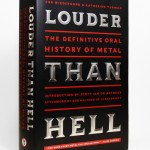 A new book called Louder Than Hell: The Definitive Oral History of Metal is out on It Books, a division of HarperCollins The Village Voice ran an excerpt that deals with the underside of the NYC metal/crossover scene, and there’s some great quotes, some of which come from the Cro-Mags.

Harley Flanagan: “I was hanging out with violent skinheads with crazy pentagrams and swastikas tattooed all over them, listening to Venom and Discharge, huffing glue, trying to invoke demons.”

Jon Joseph: “It became a daily occurrence to find people either overdosed or murdered, but everyone took it in stride.”

The Voice also ran 25 photos from the book of bands that vary from Dokken to Agnostic Front to Slayer.

Order from It Books.